Watch the placement of your wedding cake 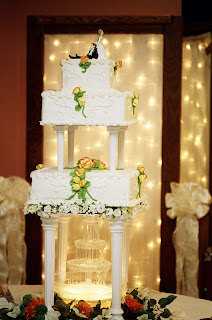 Where are you putting the wedding cake?

Obvious things to watch for are backgrounds. I've seen cake photos that were spoiled by backgrounds such as fire extinguishers, basketball hoops, bulletin boards with kids construction paper crafts all over it, kitchen pass thru windows (which were open so you could see the kitchen clutter!), and yes, even men's room doors!

Do not put the cake table next to the DJ and do not allow the DJ’s speakers to be directed toward the cake. I’ve heard too many stories from cake designers all over the country about wedding cakes that collapsed due to the vibrations from a loud speaker (especially those with lots of bass pulsing out of it!). Many cakes aren’t put together like Lego’s, with nice snap-together parts. They are sitting on dowel supports or plastic pillars, and a loud constant vibration from a speaker IS enough to cause the cake to vibrate its way right onto the floor.

You wouldn’t think I’d have to explain this one, but if you’re planning an outdoor wedding, it’s pretty accepted that putting the cake in direct sunlight is a bad idea. Bad. Very bad. Oh let’s call it what it is … it’s downright stupid. A cake that’s covered in icing made from butter and someone thinks, “Oh let’s sit it over here, where the 85 degree sun can beat down on it for hours and hours! Yeah …. THAT’S a good idea!” (Shoot me now. Just shoot me now.)

Listen, if you ARE one of these folks who thinks it’s a good idea to put a wedding cake outside in the direct sun, let me give you another good idea. Do NOT call your cake maker and ask for a refund when your cake icing melts and runs down the side of the cake. You won’t get one. I swear, you won’t.

Oh .. and indoor weddings have the same rule. Do not put the cake table next to a big picture window where the sun is beating in thru the window, directly on the cake. Do not place the cake table over a big heat vent in the floor, or under an overhead heat duct. Not only is the heat a bad thing, but odds are good there is dust and other air particles settling on your cake as it blows out of the vent/duct.

In my never-so-humble opinion, the wedding cake is the centerpiece of your reception, so display it front and center! Don’t hide it in a corner somewhere! For 30 years, I’ve been working wedding receptions and I can tell you that people don’t line up to take photo’s of the table linens or the centerpieces or the banner behind the Head Table, but they DO line up to take a photo of the cake. As they enter the reception room, they are looking for the cake. So put it in a place of honor.

A site for Brides on a Budget!

Debi Brim
Indianapolis, Indiana, United States
Having retired from the catering and cake decorating side of the wedding industry for 30 years, Debi loves sharing her observations and thoughts on weddings and specifically, money saving ideas! She has written on the business side of weddings, and has been a speaker on the wedding industry. Debi returned to college at the age of 50 and is currently a high school cooking teacher, fulfilling a dream she has had since she was seven years old. She shares her life with her husband of 30+ years, Phil Brim, who does stand-up comedy on the side, 3 grown children and 3 grandchildren.